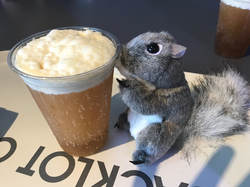 Earl, the squirrel loves adventure and loves to travel.
He also loves to read and recommend great books to kids.
He lives in the Brooks Elementary school library.
This Summer he was able to go on a GRAND ADVENTURE to EUROPE! Look through his photo album below to learn about all the places he visited. The picture above was taken on the Harry Potter Studio Tour. He LOVED looking at all the costumes and being on the sets where the movies were made but he ESPECIALLY loved drinking Harry Potter's favorite treat...BUTTER BEER! It tastes like frozen butterscotch and can only be found in wizarding worlds but click on that BUTTER BEER link above and it'll take you to a recipe that you can make yourself at home!
​Earl, the squirrel can't wait to meet you! Come visit him in the library...

You can also follow Earl the squirrel on Instagram @ brooksearlthesquirrel and by clicking on the Instagram icon below​...
If you are planning on taking a trip somewhere and would like to take Earl the squirrel with you to show him all the sights you'll see and take pictures of him on his adventure...please email Mrs. Szalai  your date of travel and information on where you will be going and what you will be seeing and doing. 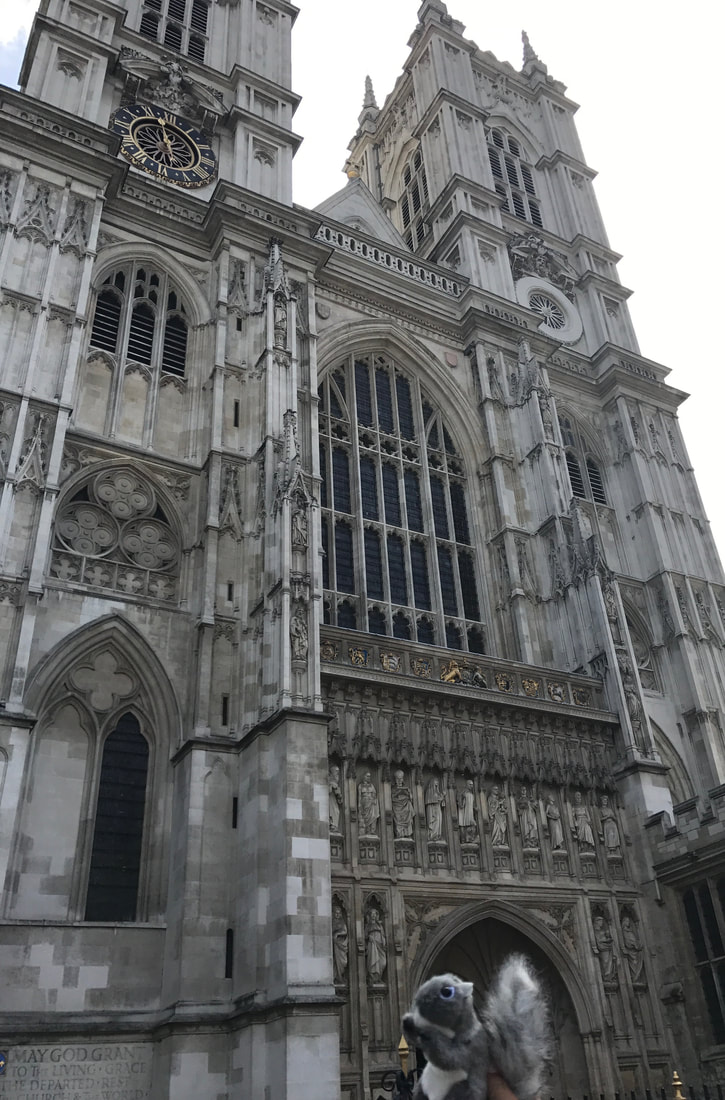 One of the first places Earl visited when on his trip to Europe was Westminster Abbey, in London. He learned that the Abbey was built in 1245 AD and that it has been the place of every coronation of the English and British monarchs since William the Conqueror.  A coronation is a ceremony in which a King or Queen is crowned. There have been at least 16 royal weddings here, including the current Queen, Queen Elizabeth the II.  It is a very special place. 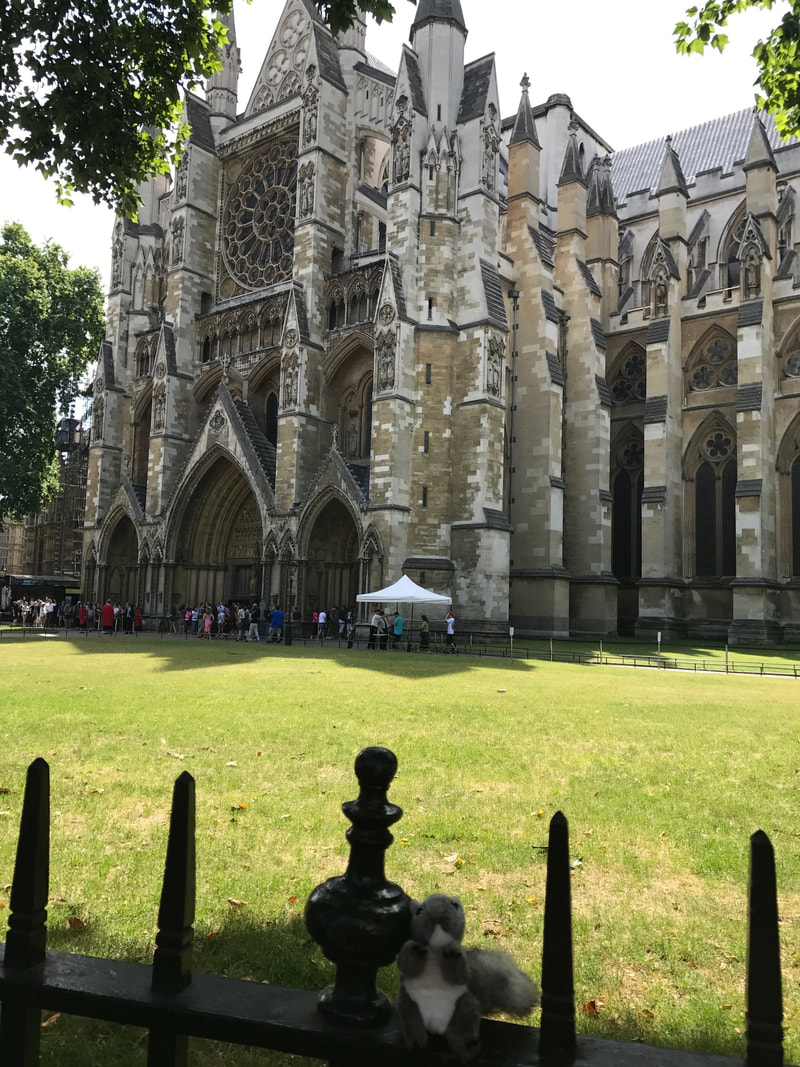 ​Earl wanted you to see another view of beautiful Westminster Abbey. 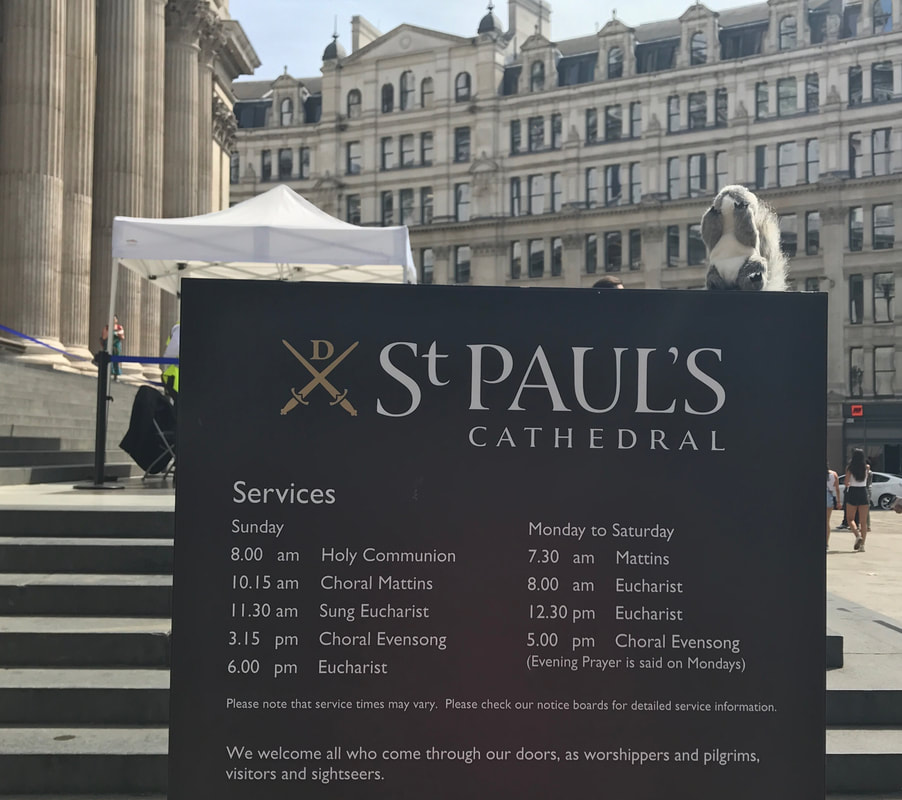 ​Earl also visited St. Paul's Cathedral while in London. This cathedral sits at the highest point in the city of London. The original church founded on this site dates back to 604 AD.  The Great Fire of London destroyed that cathedral and this one was built in 1675. Many important and special services, weddings and funerals have been held here. It is one of the most famous buildings in all of London. 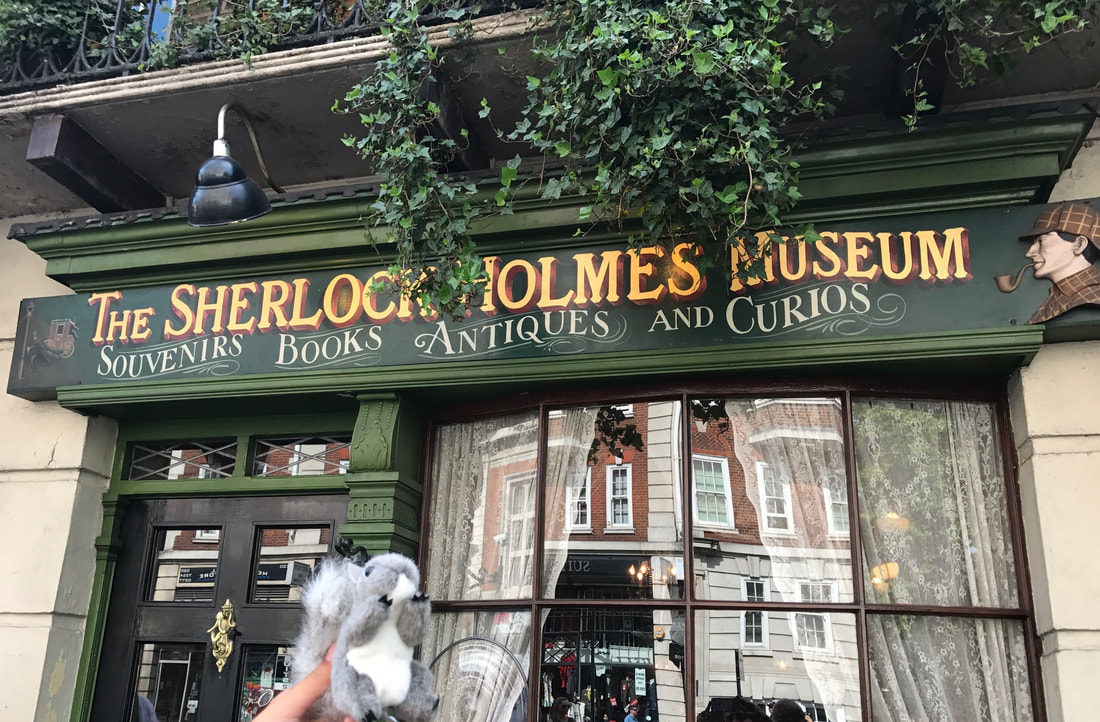 ​Earl LOVED visiting the Sherlock Holmes museum while in London! This guy LOVES himself a gooood mystery! He can't wait to recommend a few good ones to you! In the meantime, check out this book, Mysteries of Sherlock Holmes, in our library. He thinks you'll love it! 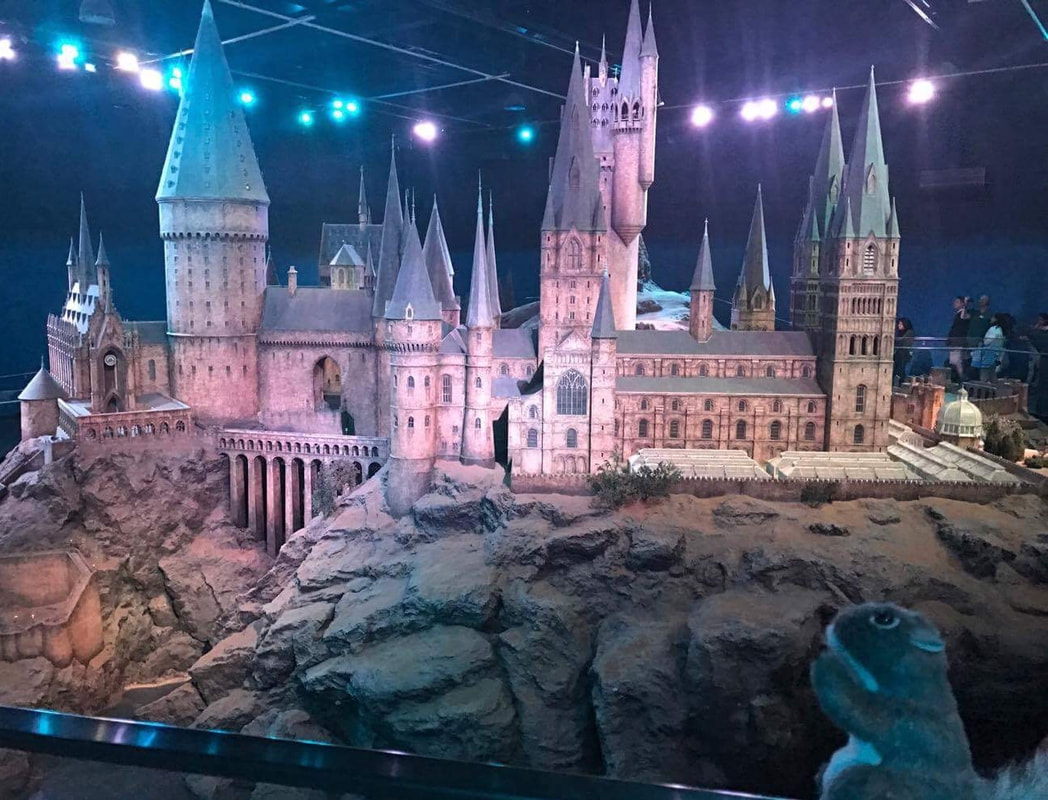 Earl LOVED going to the Warner Bros. Studio Tour - The Making of Harry Potter! He loved seeing the sets where the movies were made, the costumes, this model of Hogwarts and finding out how filmmakers brought the magic of the books to life. 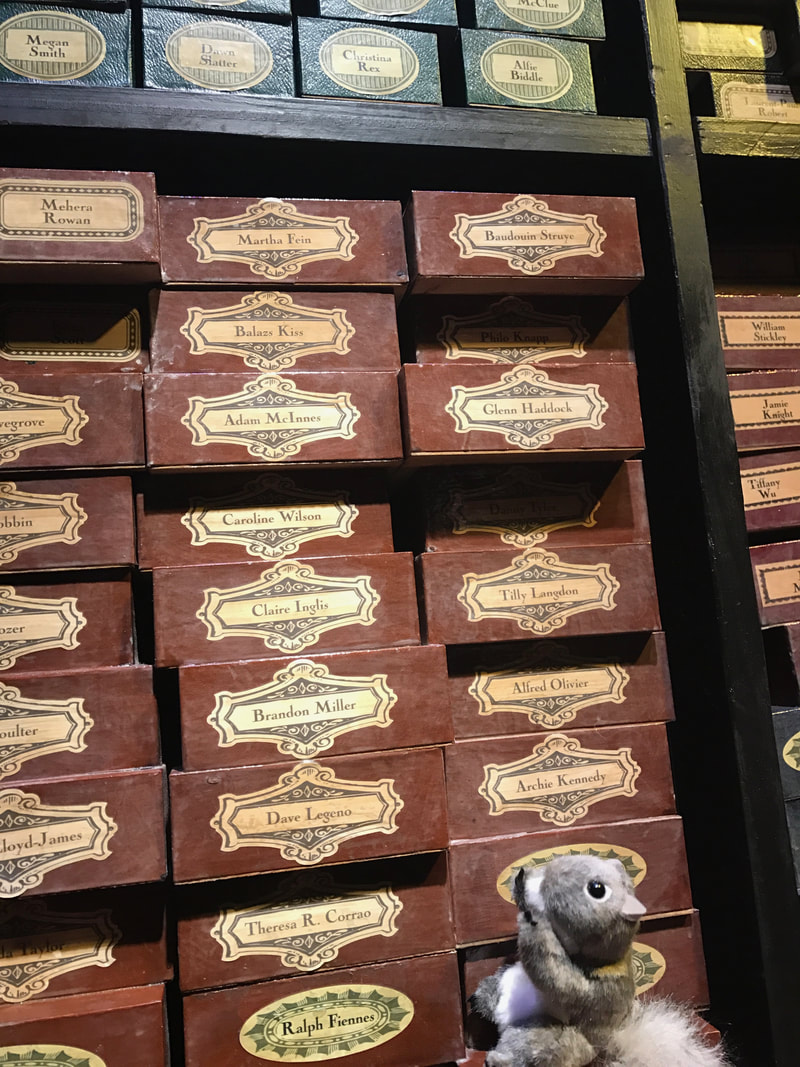 Earl enjoyed the sights of London and wondered what it would be like to ride the London Eye. 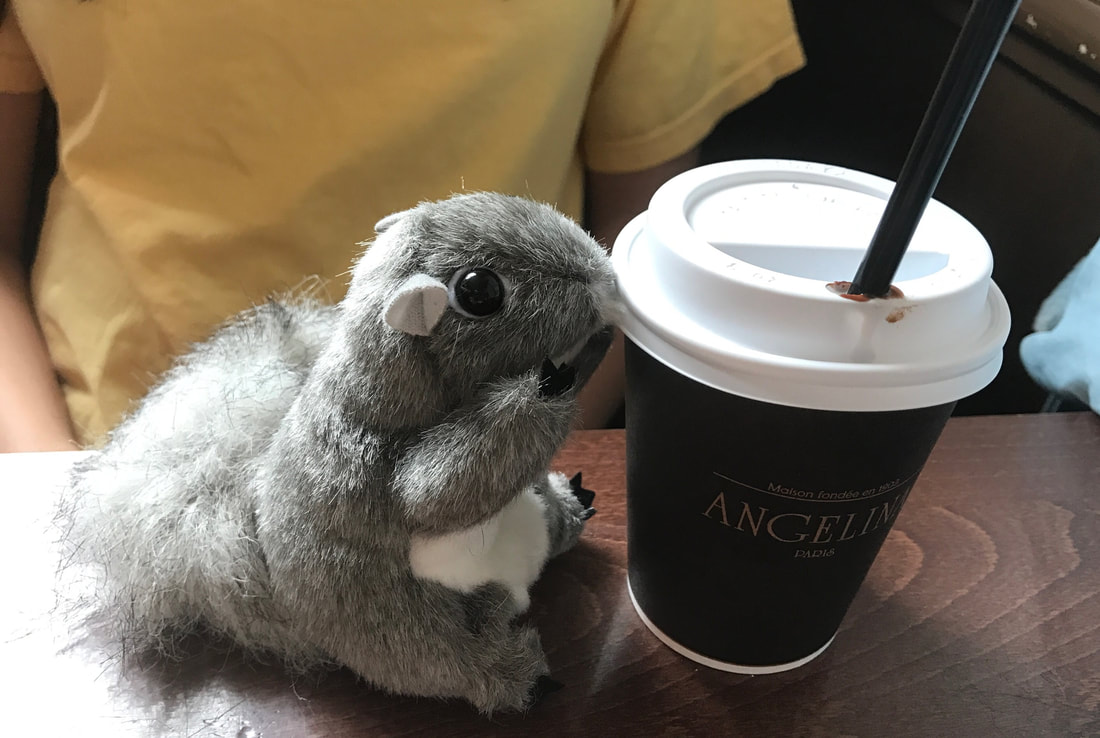 ​First thing Earl did when he arrived in Paris was enjoy some of THE BEST hot chocolate that there is! After nuts, chocolate is Earl's favorite treat! 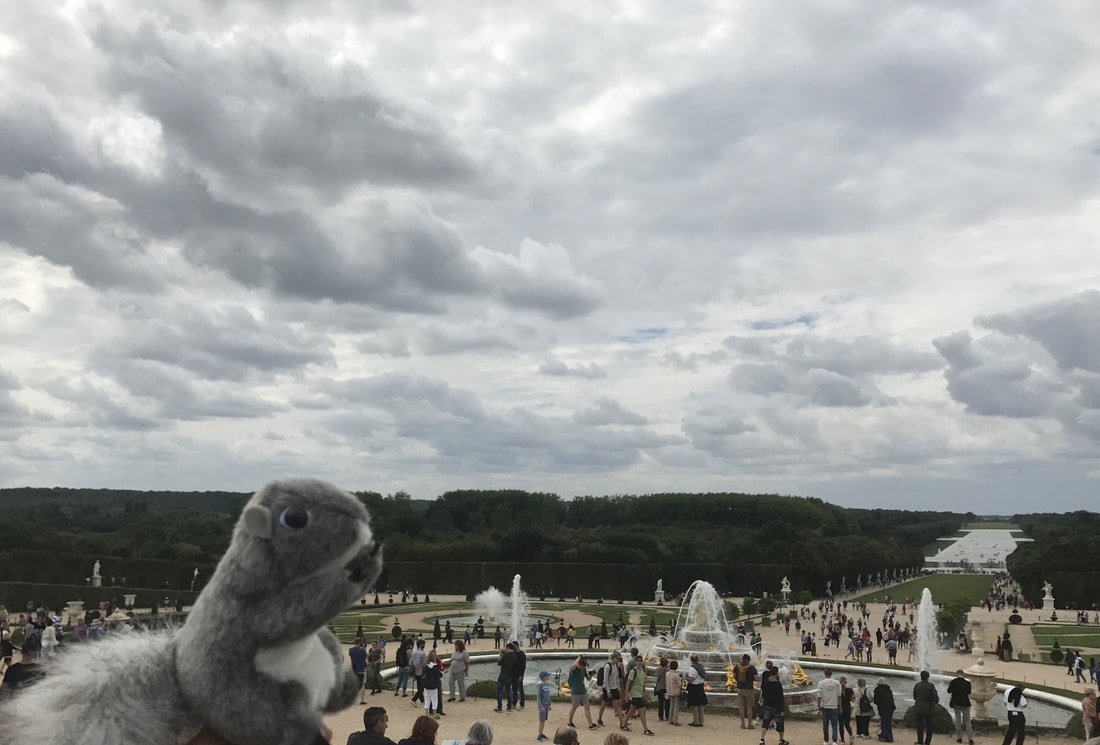 ​Earl visited one of the most FANCIEST places in ALL the World...Versailles. He loved watching the fountains. They were mesmerizing! 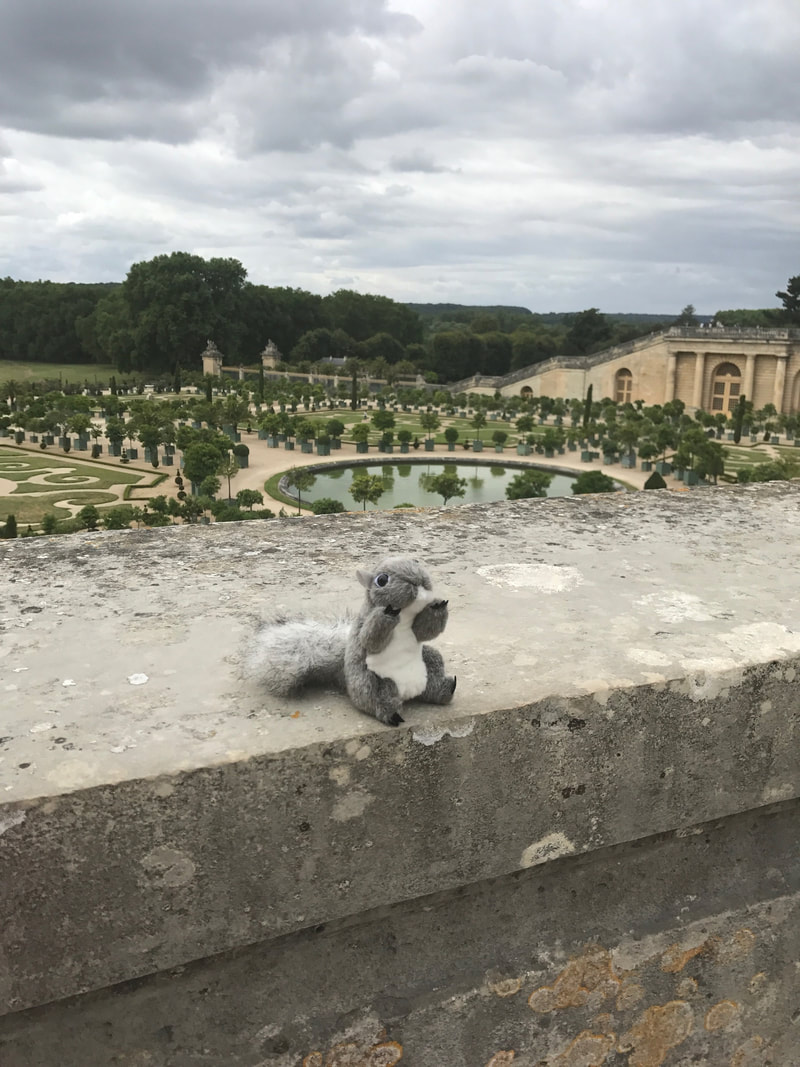 ​Here's another view of the beautiful grounds and landscaping in Versailles. 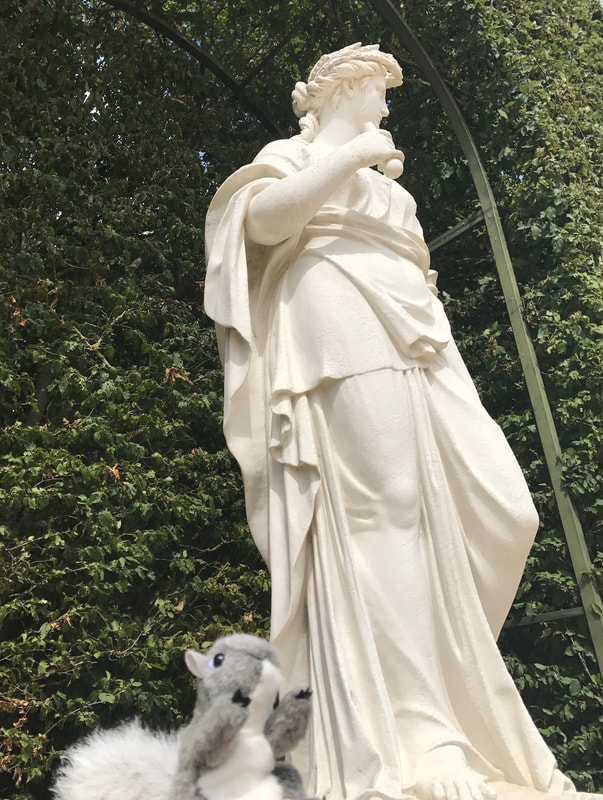 ​Earl thought this lovely lady made of marble was very beautiful and must be VERY expensive! He found her in the gardens of Versailles. 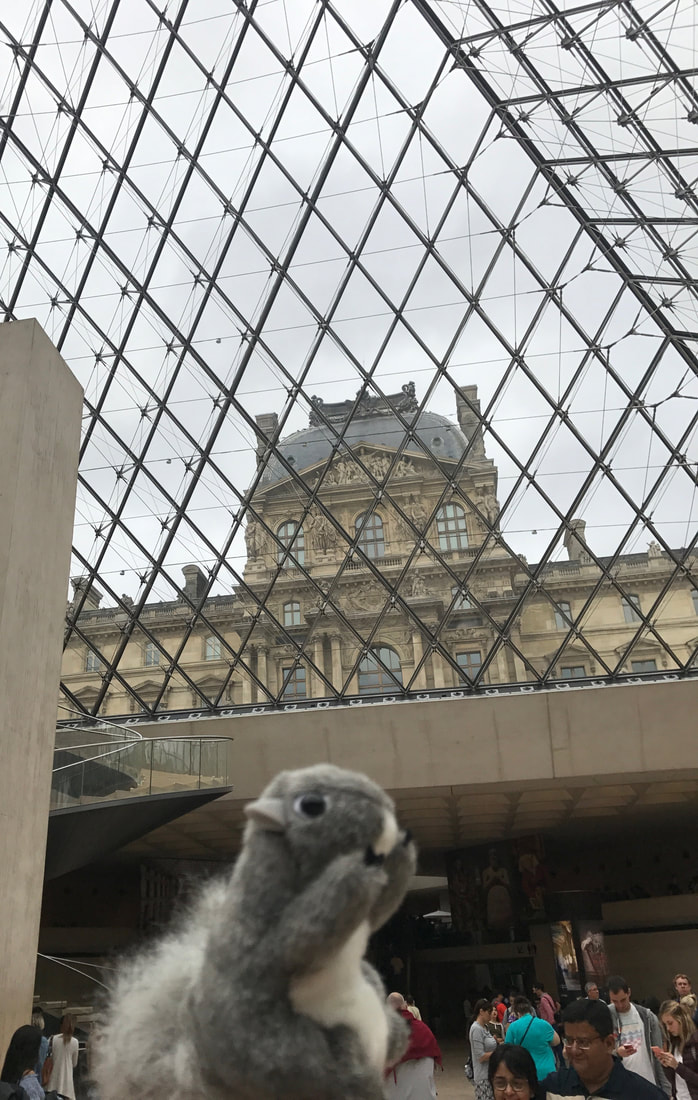 ​Visiting the Louvre in Paris, France was certainly a highlight of his trip.  It is the largest museum in the WHOLE World! There was SO MUCH to explore and learn about! Here he saw the most famous painting in the whole world, the Mona Lisa. 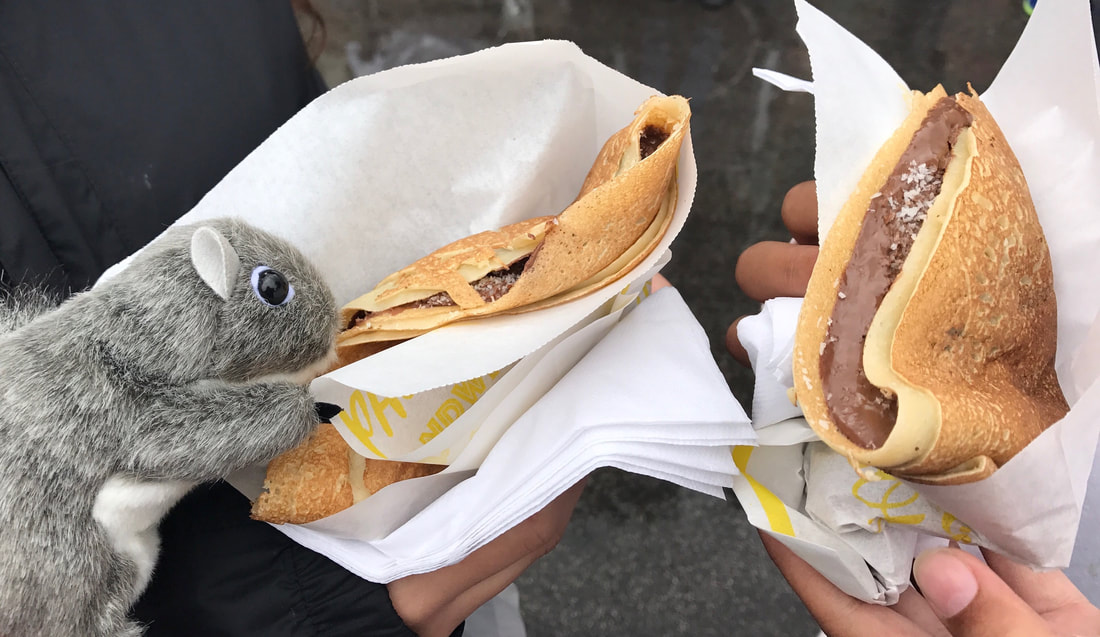 ​After exploring all day inside the world's largest museum, the Louvre, Earl was given a treat...CHOCOLATE CREPES!!! 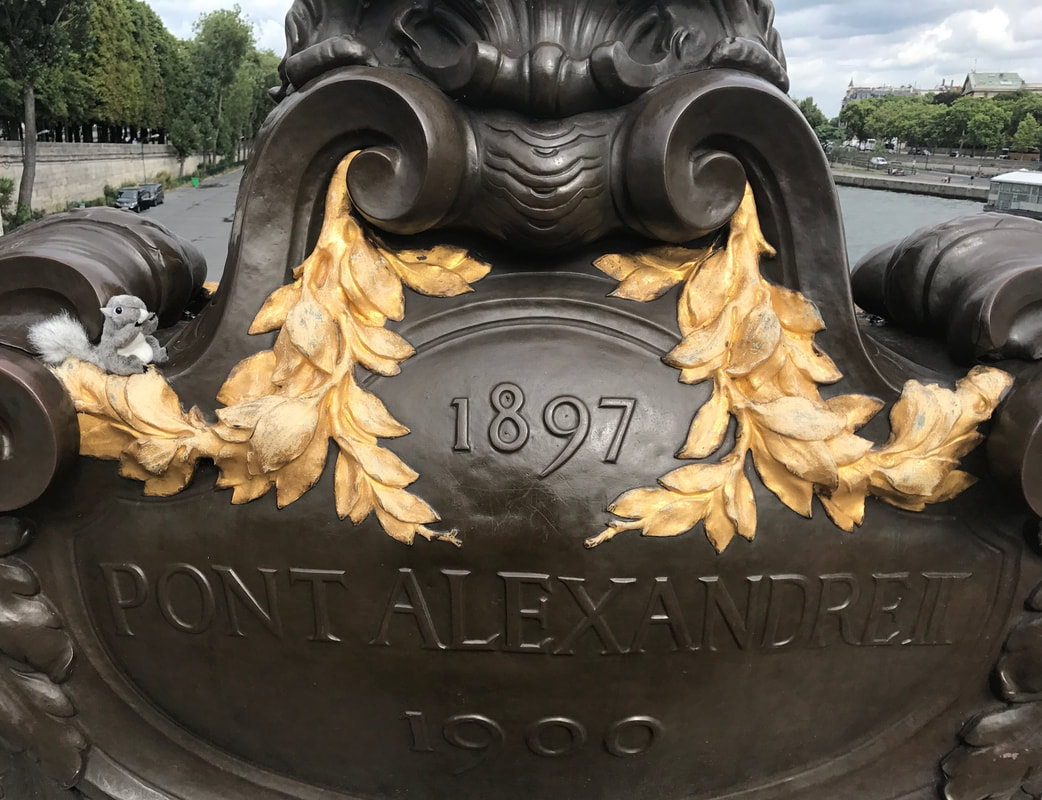 ​Earl was in awe of how beautiful this bridge in Paris over the Seine river was. The bridge is the most ornate, extravagant bridge in the city. The bridge is a marvel of engineering and a historical treasure. 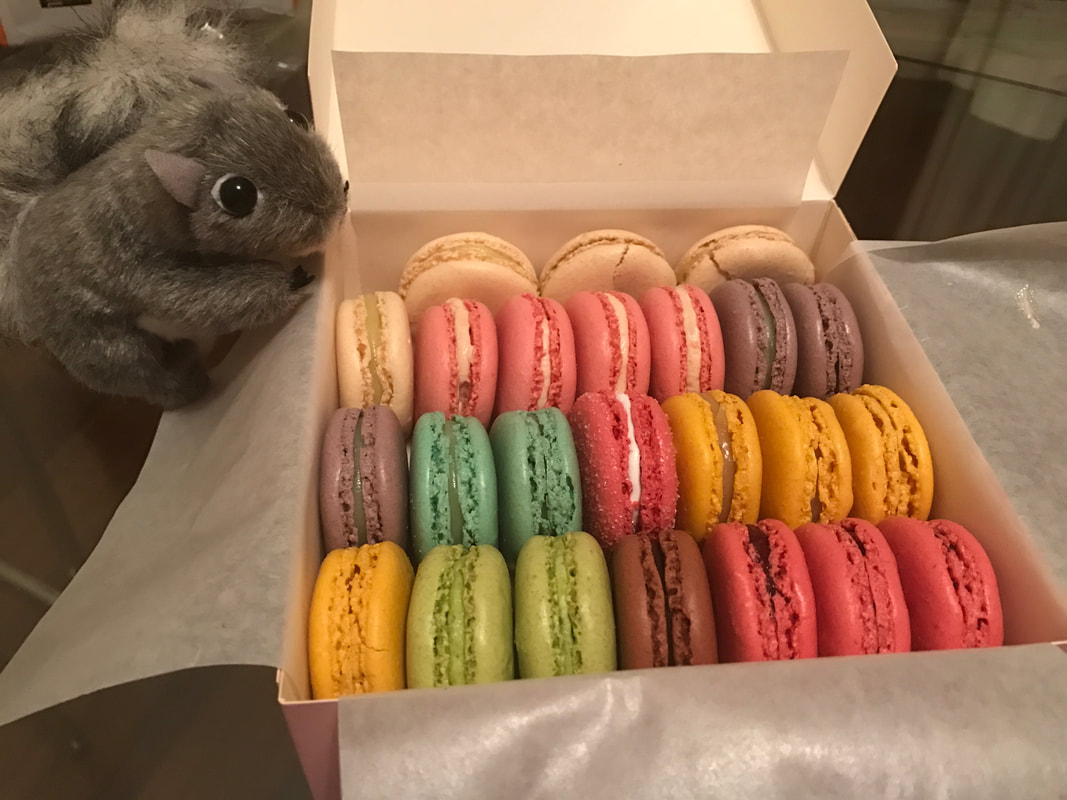 When in Paris...eat LOTS of sweets! Especially bright, colorful, YUMMY macaron's!  NOT macaroni...Macaron's! They are SO yummy! They are like little wafers of HEAVEN! Of course, Earl preferred the chocolate ones the best! 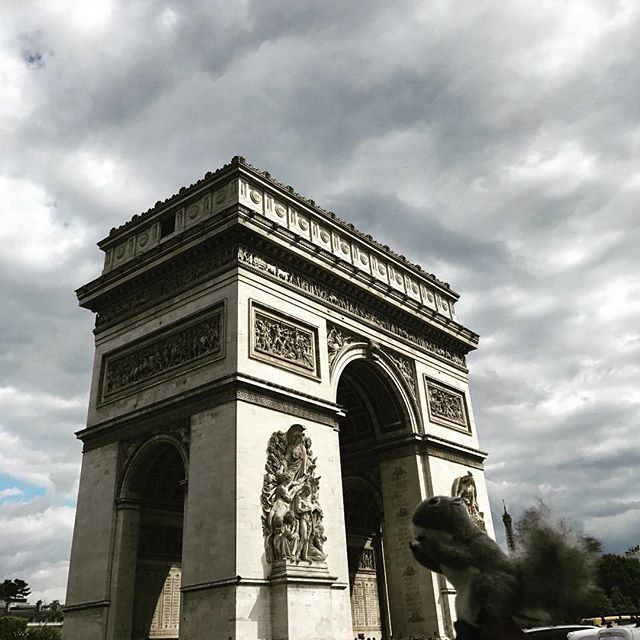 Visiting the Arc de Triomphe in the center of Paris! It was designed on the order of the emperor Napoleon in 1806 to honor those who had died in the Napoleonic and French Revolutionary wars. The Arc de Triomphe is at the end of one of the world's most famous and expensive streets, where a dozen roads meet. Earl, the squirrel thought it was an amazing sight! 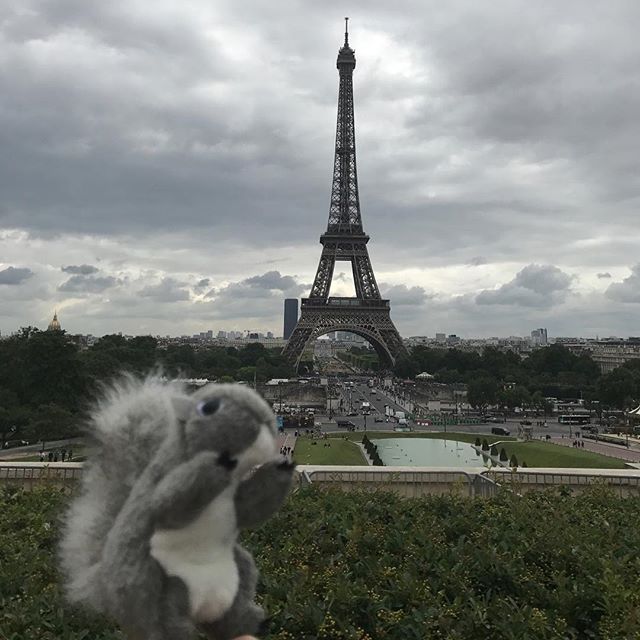 Earl, the squirrel made it to the Eiffel Tower! It was designed for the 1889 Paris Exposition and was not intended to be permanent. Today it is the symbol of France and about 7 million people visit it every year. It took 300 workers two years to build. It is 1,050 feet tall. There are 1655 steps from the ground to the top...which he passed on and took the elevator instead. 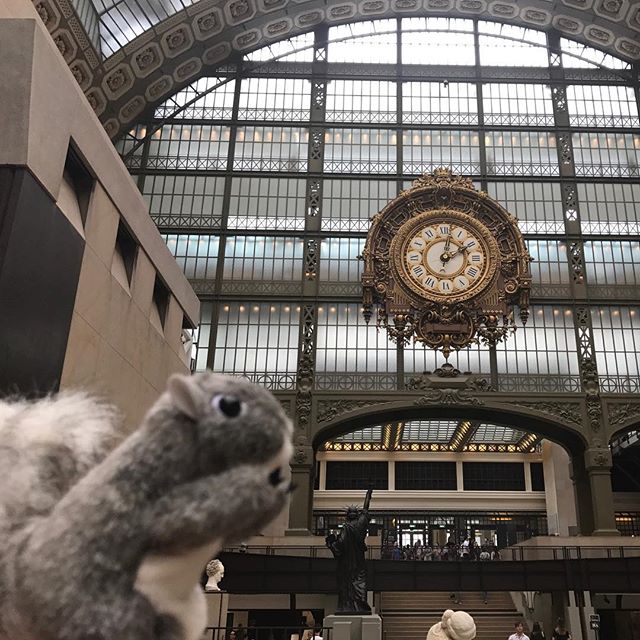 Earl, the squirrel LOVED visiting the Musee d' Orsay! He thinks it is the BEST museum in Paris...probably even the WHOLE world! It is housed in a beautiful old railway station built in 1898. The museum holds mostly French art dating from 1848-1914, including paintings, sculptures, furniture and photography. Beautiful masterpieces by Monet, Manet, Degas, Renoir, Cezanne and Van Gogh among many others are displayed here. Earl was so overwhelmed by the beauty of it all. He can't wait to visit again! 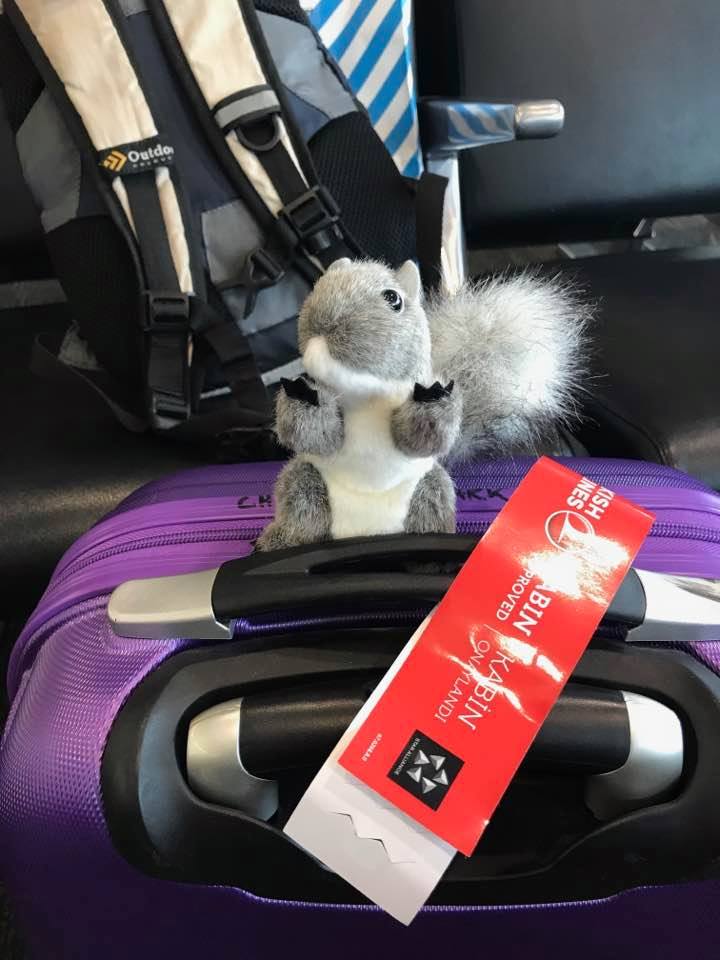 Earl excitedly waits to board his 14 hour flight on Turkish Airways to Israel! 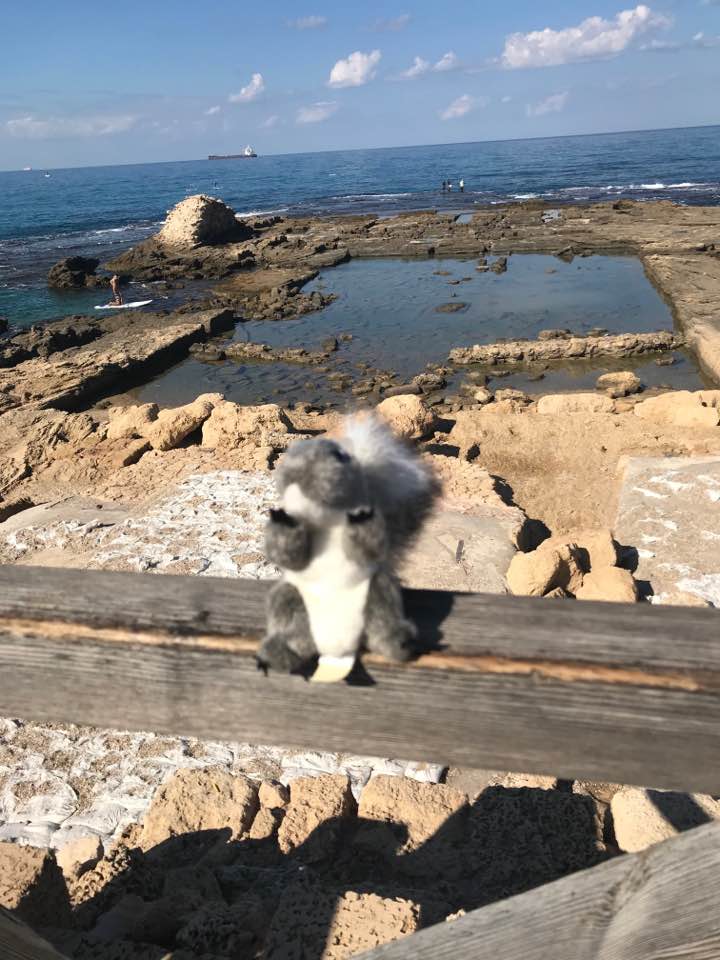 Earl loved basking in the sunshine at Caesarea by the Sea! 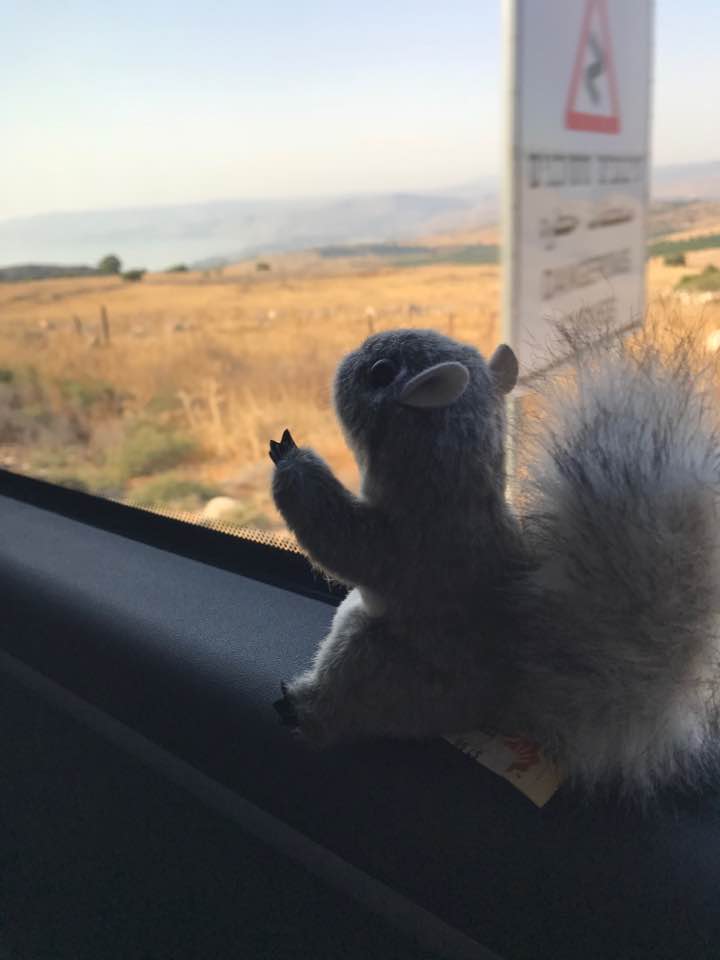 Gazing out the bus window at the Sea of Galilee. 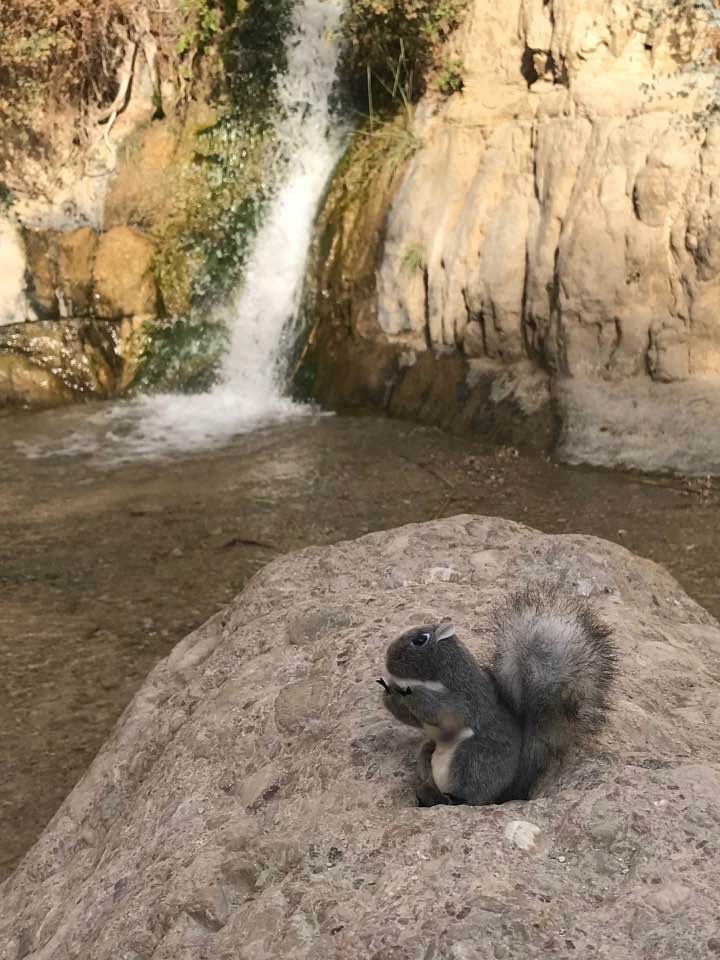 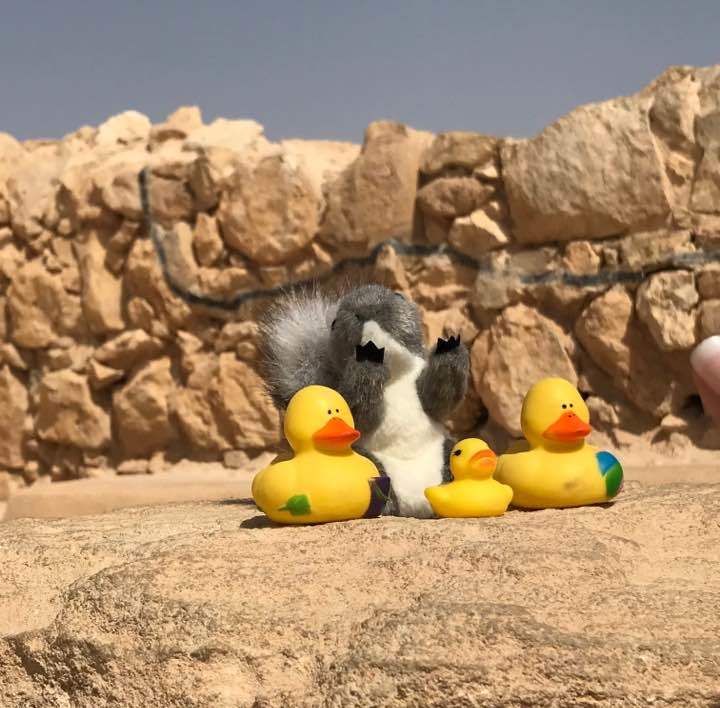 Earl enjoyed taking in the sights with some new friends in Masada.
Powered by